As Jorge Luis Borges imagined paradise as a kind of library, my paradise is a gallery filled with my favourite artworks. To narrow it down to just 11 is already a compromise. Of the traditional genres, portraiture and landscape are the two that interest me the most. My passions: the Renaissance, the Romantic movement, Persian manuscript painting and the art of the Mughal court.

Robert Rauschenberg said, “Photography is the most direct communication in non-violent contacts.” Diane Arbus’ image of a boy holding a hand grenade in Central Park seems emblematic of the perilous state that we find ourselves in today. This critical moment in human history when our willfulness, our recklessness, our inability to see beyond our own selfish orbit, threatens to propel us all to the brink of destruction. Faced with the imminence of catastrophe, how do we react? Professor Stephen Hawking published this statement in one of his articles: “For me, the really concerning aspect of this is that now, more than at any time in our history, our species needs to work together. We face awesome environmental challenges: climate change, food production, overpopulation, the decimation of other species, epidemic disease, acidification of the oceans. Together, they are a reminder that we are at the most dangerous moment in the development of humanity” (The Guardian, December 2016 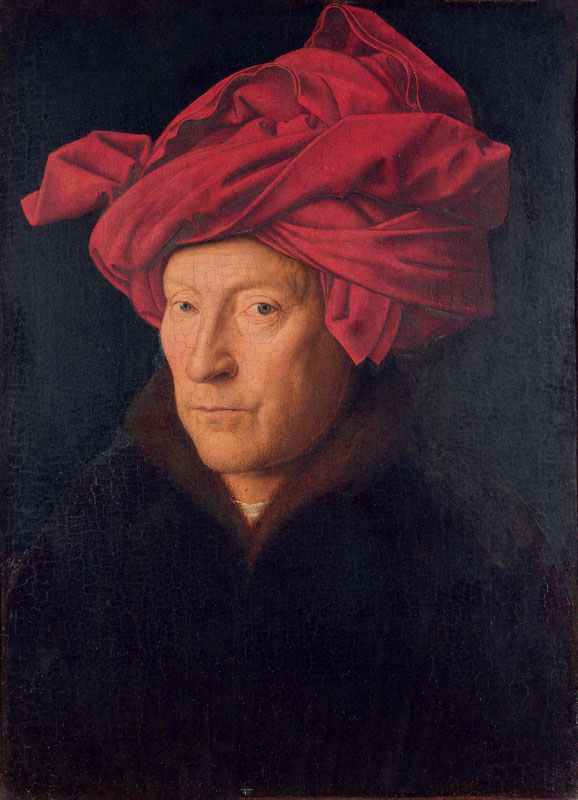 Two masters of the Northern European Renaissance, Dürer and Van Eyck, both at the top of their game. Dürer (left) had just returned to Nuremberg from Italy and is flaunting his newfound status as a successful artist: the elegant costume, the expensive kid gloves, the view of his route across the Alps. At 26, he is every bit the cosmopolitan man-about-town. Portrait of a Main in a Turban by Van Eyck (right),
believed to be a self-portrait, employs the same confrontational gaze. Proud, alert, challenging, disarming. Every detail rendered with cold
precision. Even the bloodshot eyes. And that hat! 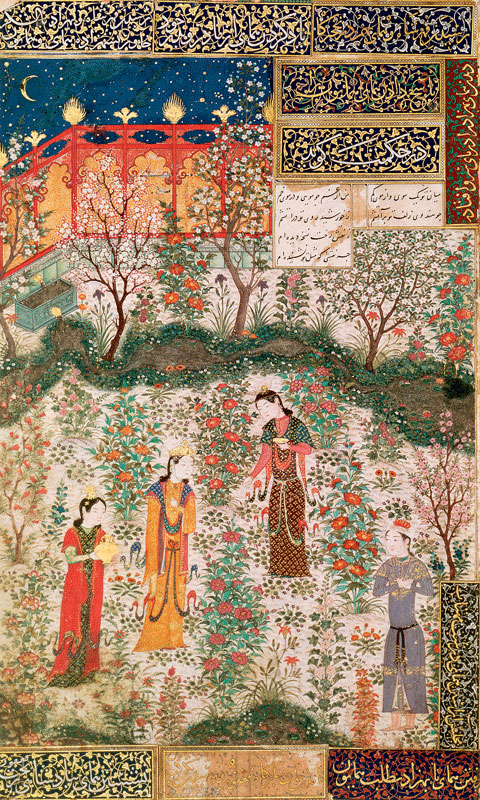 Back in the 80s, as a student, I would visit the National Gallery and stare at this painting for hours. Small, inscrutable, strangely compelling, it still draws me back. Today, Giovanni Arnolfini and his wife look like creatures from another planet – bone-white, ethereal, otherworldly. The wealthy merchant from Lucca must surely be the pastiest Italian ever painted! Typical of the northern Renaissance is the minute attention to detail: the ratty dog, the discarded slippers, the oranges on the windowsill, the single candle burning overhead, and the arrival of two visitors reflected in the mirror on the back wall – all elements supporting the beguiling narrative.The miniaturist style of the northern Renaissance was my pathway into Persian painting. I first encountered Humay and Humayun in a Garden (right) in Ernst Gombrich’s The Story of Art. The 15th-century miniature is contemporary with the Arnolfini portrait and shares much in common – the amorous couple, the folded drapery, the frozen moment. But the similarities stop there. The treatment of light and space is radically different. Van Eyck obsesses over optical trickery, conjuring up the illusion that we are witnesses to a real scene. His Persian counterpart, on the other hand, paints a mythic space inhabited by figures who are no more weighty and substantial than the flowering plants around them. The Persian artist, whose name is not recorded, celebrates the patterned surface like a goldsmith applying enamels to a brooch. It is only on close inspection that we realise this is a night scene, indicated by the crescent moon and starry sky above the garden fence.


One of my most valued mentors was the art historian, collector, polymath and word-alchemist, Stuart Cary Welch. Not only did he have an exceptional eye, but he also possessed a rare ability to convey his insights in lyrical prose. Each encounter with Cary left me feeling inspired and uplifted. On one occasion, I travelled with a Sotheby’s colleague from London to his home in New Hampshire. The invitation was “to look at some paintings together.” We disappeared into his study after lunch and emerged five and a half hours later. So completely absorbed had we become in what we were doing that we were utterly oblivious to the passing of time and the need for any form of rest or refreshment. One of the paintings we viewed together was this Indian miniature, A Sufi Sage (left), which Cary had attributed to the little-known Persian artist, Farrukh Beg, working in the Deccan. The fantastic, jungly vegetation and eccentric colouration indicates that it was executed during the artist’s sojourn at the court of Bijapur in southern India. But what intrigues me most about the subject is that it is plainly based on Northern European graphic sources, namely, the celebrated portrait by Dürer of the humanist scholar Erasmus of Rotterdam, conflated with other famous Dürer engravings of Melancholia and the hermit Saint Jerome in His Study (right). It was the pamphleteering activity of Jesuit missionaries that brought about the spread of Christian prints to India, spawning such curious hybrids as this Sufi saint. I can still visualise Cary Welch in his study, leaning forward like a latter-day Erasmus, scrutinising each miniature with rapturous care.


The Romantic Movement. The Power of Nature. The Feebleness of Man. And what could be more powerful than the movement of an ice pack, or a hurricane at sea? Both Friedrich (top) and Turner (above) capture the terrifying force of nature at her most sublime and dangerous. Turner himself is at the centre of his painting, strapped to the mast of the steamship. He records in his diary: “I wished to show what such a scene was like. I got the sailors to lash me to the mast to observe it; I was lashed for hours and did not expect to escape but I felt bound to record it if I did.” More than a century before Jackson Pollock and the Abstract Expressionists, Turner attacks the canvas with his brushes, striving to replicate in paint the elemental fury that he himself had witnessed in the storm. In Friedrich’s Das Eismeer the crew of The Hope is beyond hope: their vessel crushed like a flimsy model boat by the jagged Arctic ice. 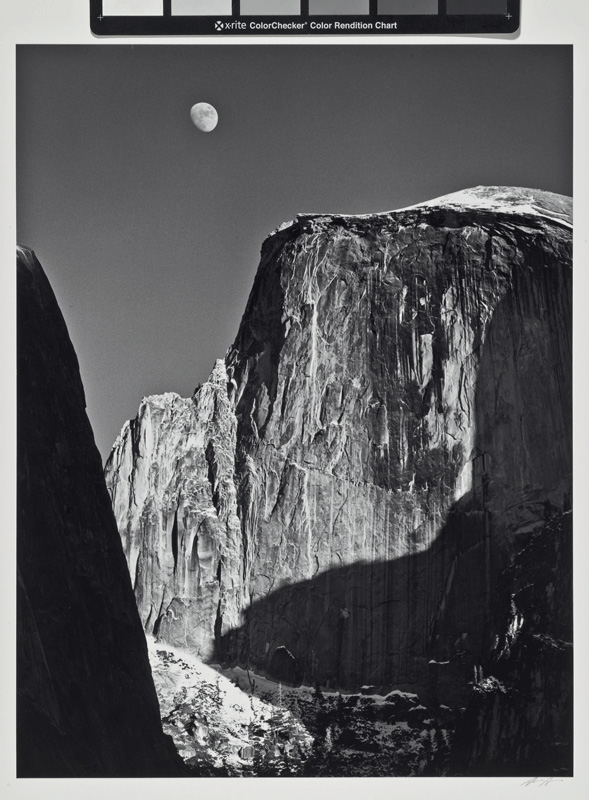 The Wanderer above a Sea of Fog. This has it all: grandeur, majesty, solitude, timelessness, eternity, the sublime. Both Caspar David Friedrich and Ansel Adams exploit the power of the repoussoir: the dark figure on a rocky outcrop, his back turned in stark silhouette (left); the encroaching shadow that edges up the sheer cliff-face, devouring all in its path (right). “Die Kunst wahrlang, das Leben kurz” – Art is long, Life is short (Johann Wolfgang von Goethe).

Edward Gibbs joined Sotheby’s in 2003. He advises private, corporate and institutional collectors across Europe, North America, North Africa, The Middle East, South Asia and throughout the Muslim world. He oversees three major auction categories: Arts of the Islamic World, Art of Imperial India and Contemporary Arab, Iranian and Turkish Art. Gibbs’ career exemplifies his passion for Islamic Art, which began in 1988 with a visit to al-Andalus and the Great Mosque of Cordova. Prior to joining Sotheby’s, he served for seven years as lecturer in Islamic Art at the School of Oriental and African Studies at the University of London, where he set up the innovative Foundation Course in Asian Art with Sotheby’s Institute of Art. In 1997, he was invited by the British Council to co-curate the exhibition Traditions of Respect: Britain and Islamic Cultures to mark the 50th anniversary of the independence of India and Pakistan. The exhibition was opened by Her Majesty Queen Elizabeth II in Lahore and New Delhi. Gibbs worked for two years with The Abu Dhabi Islands Archaeological Survey on Marawah Island, off shore Abu Dhabi, under the patronage of Sheikh Mohammed bin Zayed al Nahyan. He went on to excavate the Mamluk Period fortress at Homs, Syria, as part of the British-Syrian Archaeological Project at Homs Citadel. Earlier in his career, he spent several years travelling across the Middle East carrying out research and excavations in Egypt, Syria and the Arabian
Gulf. Gibbs has lectured at the University of London, the British Museum, the Victoria & Albert Museum, the Honolulu Academy of Arts and the Museum of Islamic Art, Doha. In 1997, as visiting scholar at the British Museum, he catalogued The Godman Collection of Iznik Ceramics and in 2000, he was visiting scholar at the Art Institute of Chicago and the Gayer- Anderson Museum in Cairo. He has an MA with Honours from Cambridge University and an MA with Distinction from the University of London.