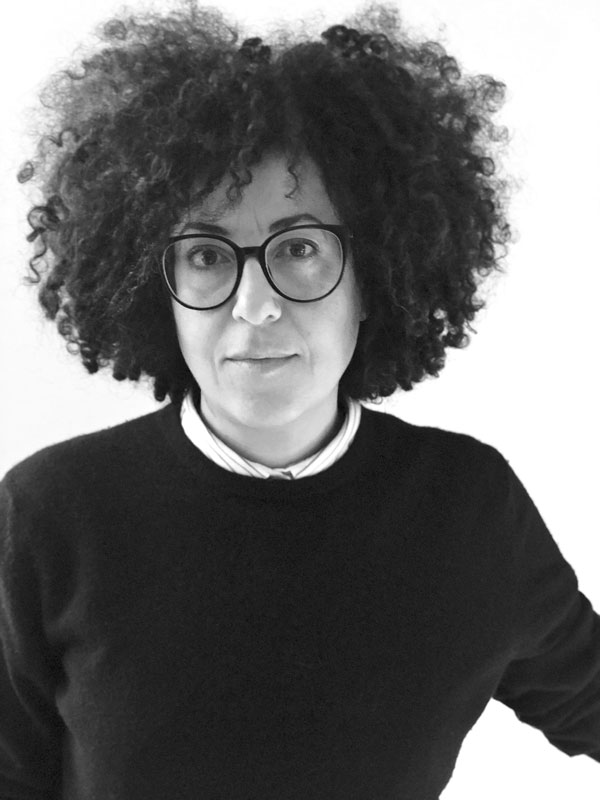 Born in London and raised primarily in Paris, Hoda Tawakol is a Franco-Egyptian artist who lives and works in Hamburg, Germany. Tawakol’s broad practice encompasses hand-dyed and sewn textile pieces, mixed media sculptures, and installations interweaving textures, grids and lattices, in addition to works on paper. Her approach to contemporary textile art is deeply rooted in the feminist movement of the 1970s. The artist’s research focuses on traditional ritual practices and imagery associated with those transitional and transformative moments in a woman’s life. Her work attempts to deconstruct symbols and archetypes that beset female agency. Through the variety and compositional complexity of her aesthetic interventions, Tawakol in her work touches on the boundary between the extreme figuration of personal identities and their dissolution, even to the point of disintegration. Tawakol is interested in relating formal aesthetic concerns to societal issues, especially to those of a gender-specific nature.

The female body as well as societal and gender issues are central elements in my work. In my new series Mummy, I explore the body as an abstract and immaterial entity embedded in the context of the ancient Egyptian culture. In Ancient Egypt, women and men had legally equal rights, five Queens reigned over Egypt and powerful female deities were worshiped. Ancient Egypt was not only a sophisticated advanced culture – it was also a feminist culture. I was therefore interested in creating a junction between the feminine and the rituals and aesthetics of Ancient Egypt.

THE MUMMY ACTS AS A CHAMBER OF METAMORPHOSIS
LIKE A COCOON, SYMBOLISING IMMORTALITY, RENEWAL
AND THE ETERNAL

The mummy and its double meaning (the mother and the embalmed wrapped corpse), has a paradoxical nature. It evokes both the presence of a body and the absence of a being, but also the notion of inside versus outside and mortality versus transformation. The mummy acts as a chamber of metamorphosis like a cocoon, symbolising immortality, renewal and the eternal. And finally, the mummy is a silent contemporary witness of how colonial powers dealt with the cultural heritage of Egypt and the partial appropriation of its treasures.

THE FIRST STEPS OF MY EXPLORATION WERE FOCUSED ON GATHERING IMAGES OF ANCIENT EGYPTIAN SHAPES AND TEXTURES.
In various museum collections and literature, I selected and studied over several years images that were then “diluted” into my work.

AN IMPORTANT PART OF MY WORK CONSISTED IN RECONSTRUCTING SHAPES AND WRAPPING PATTERNS FOUND IN ANCIENT EGYPT.
I made a replica of a falcon mummy in order to understand the technique and the tactility of the procedure. The gesture of wrapping is a touching experience as you embrace the contours of a body (even though not a real one in the case of my replica) with repetitive layers of fabric and with your hands holding the corpse. There was something nurturing and caring within the process itself.

After researching and experimenting, I started developing works, focusing on wrapping techniques and patterns, however with a strong level of abstraction. IN THE WORK IMMORTALITY, I USED HAND-DYED FABRIC AND RECREATED AN ALTERNATE FOLDING PATTERN PRIMARILY USED FOR COVERING THE FACE OF A MUMMY.

Intrinsically tied to the mummy, the sarcophagus is the object of desire, hiding the embalmed corpse. OPENING A SARCOPHAGUS IS DISCOVERING, BUT ALSO VIOLATING, WITNESSING HISTORY AS WELL AS DISRESPECTING A BEING. I wanted to work on this duality with a mirrored hybrid of a female body and a sarcophagus.

Resin is an essential material for mummification as it preserves the body over thousands of years and “freezes” time. FOR THIS SERIES OF TIEDUP MINIATURE MUMMIES, I USED NYLONS FILLED WITH RICE THAT I THEN FIXED WITH RESIN.

The pyramid is a key element in the ancient Egyptian culture and architecture. THE SHAPE OF A PYRAMID IS BELIEVED TO REPRESENT THE DESCENDING RAYS OF THE SUN. It is simultaneously a tomb and a chamber of “resurrection.” The miniature, made of hand-dyed fabric, is a model for a big scale wall tapestry (600 x 300 x 10 cm) exploring the great pyramid of Cheops with its hidden corridors and chambers.